In June this year, I took on one of the biggest challenges of my life without really realising how big it would be. I agreed with 6 of my friends that this year we would do the Welsh 3000s. How hard can it be I thought? I’ve climbed a few mountains, I’m pretty fit and it’ll be a great reason to finally go to the top of some of the Snowdonian peaks that I haven’t yet done (including Snowdon itself).

What is the Welsh 3000s? For those that haven’t come across the Welsh 3000s challenge – it is to get to the summit of every peak in Wales over 3000ft in under 24 hours without using any transport. Fortunately, the peaks are all located in Snowdonia and so this is “only” 26 miles in total with a scary 3,500m of ascent. 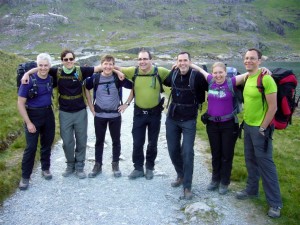 I like a challenge – and this sounded like it would push me a bit – plus it fitted nicely with a couple of other things I had going on – the moonwalk (26 miles of walking in a bra overnight for breast cancer) and the University’s fit@50 step challenge – I was convinced it would get me a pretty good step count!

To keep me even more motivated I decided to look for sponsorship for this, connecting it to the moonwalk – giving me a reason to raise even more money for a great cause. 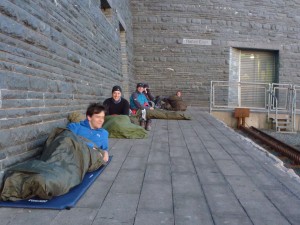 The start of the Welsh 3000 is the top of Snowdon, so on the evening of the 8th June, we set off up to the mountain, to bivvy at the top, ready to get going as soon as the sun came up. Now you’d think it would be quiet at the top of a mountain in the middle of the night wouldn’t you – in actual fact it was packed – several hundred people walked through that night – doing the 3 peaks challenge (not half as tough as the welsh 3k!! ;)) fortunately we were warned so we camped out of the way of the hordes on the railway station! 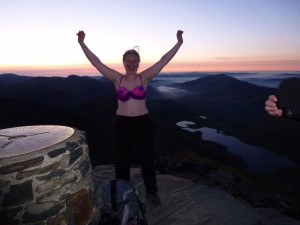 With the sun rising at 4:30am we were up and ready to go. I couldn’t walk the whole way in my moonwalk bra, so it spent most of the time strapped to my rucksack, with changes for a couple of pics on some of the better-known peaks.

So we were off – the views were stunning, looking down over the cloud nestling in the valleys.

By 8am we had done our 3rd peak – Crib Goch – the ridge with a sheer drop on either side – and we were headed down to the road for the first of our support stops. Our support crew were in the car park waiting for us with bacon sandwiches, tea, coffee and plenty of energy to motivate us.

Starting to get a little tired. Less than an hour later we were off again – up to “The Glyders” for the tough middle stretch. It was an amazing day and the scenery was really beautiful. By 5pm we’d reached Tryfan and I was really starting to feel the size of the challenge. 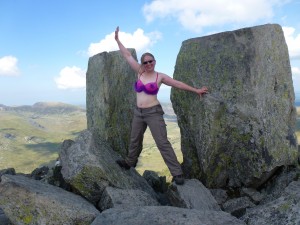 Worn out by the scree coming down by Bristly Ridge I just about made it to the top but my legs were really starting to wobble. We’d been walking and scrambling solidly for over 12 hours – hard to believe, but we were still going! The route off Tryfan took us down to the road again and was the stage where I realised that while I’d been training in the gym for uphill, I really hadn’t done any for downhill. Once again our stunning crew were at the bottom waiting for us – this time with soup, bread and cheese and were even willing to give us foot massages.

Getting really tough – only 10 hours walking to go! 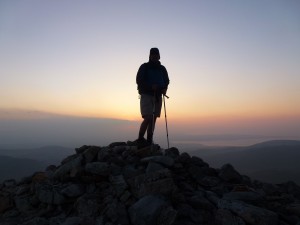 With 2/3 done it was time to get going again – into “The Carnedds”. This was where it started getting really tough. As we made our way up once again all that kept me moving was to put one foot in front of the other. After the top of that first peak on the last leg (no 9 overall), it got a little easier – right up until the sun started to disappear.

As the sun set at around 10pm, in my head we were very nearly there. We actually still had another 5 peaks to go! An hour or so later we were struggling to find the route – walking through rough ground aiming for some shadow of a peak in the distance – it wasn’t too steep – the hills over here were more rolling – but that peak never seemed to get any closer – and I was starting to lose count of how many we’d done and how many to go. More steps later, at around 2am we found what appeared in the dark to be a field of sharp spikes stones sticking up from the ground – the last hurdle between us and the end of the challenge. 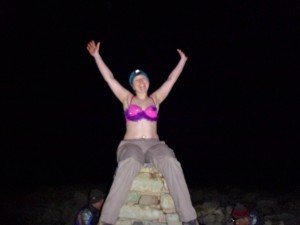 Oh No – we still have to get back down!! However – we were at the top of a peak – somehow I’d blocked from my mind that we still had to go down several thousand feet to get to where we’d parked the cars – and as I’d discovered earlier, going down hurt – lots! 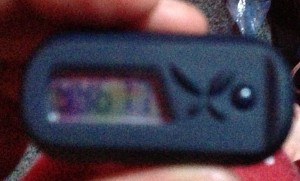 2 hours later, at just before 4am, we finally got to the car we’d been walking for just under 24 hours and actually done closer to 32 miles (plus the ascent of Snowdon the day before). My step counter (zeroed at the top of Snowdon) told me I’d done pretty well – 94,677. (One part of me had the idea of trying to get to 100,000 but my feet would not move one more step!!!)

Such an amazing achievement! It took me about 2 weeks to get a real feel for the enormity of what we’d achieved. I knew that this challenge would really push me – but I didn’t know how. It definitely taught me just how far you can go by putting your head down and putting one foot in front of the other – it’s amazing how the steps add up!

So far we have raised just under £920 for breast cancer covering both events (my target was £250!!) – if you’d like to sponsor me and help me hit £1000 here then follow this link https://www.walkthewalkfundraising.org/tough_trio